I dropped in at Jenkins Bog, just to see how the berries looked this time of year.

And was treated to a colorful, textured “feast for the eyes”!

Along the banks of every ditch that I came to…

I found colorful berries, red, yellow and pink, nestled in for a long, winter’s nap.

But the neatest thing of all, in the places where moving water had slowly turned to ice in the bog… 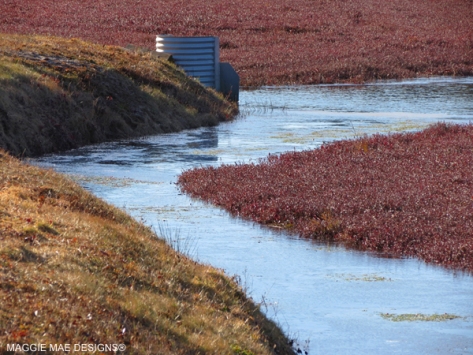 I found cranberries scattered here and there, frozen into the ice!

I felt transported, as if were walking through some abstract art gallery…

Bedazzled by blurry, plump berries covered over with layers of icy “varnish” in their newly frozen world. 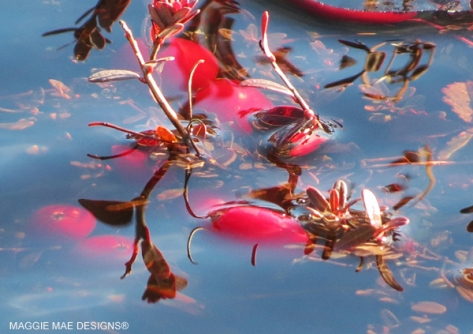 Talk about a nice surprise in the middle of winter!  😉

It should not have come as such a big surprise to me that my first cranberry harvest felt like a homecoming.

Still it’s taken me nearly a month to realize that what had so deeply touched me about the whole experience was something that was already very much a part of me.

You see I grew up on an old deserted cranberry bog, right behind our house.

The bog was like a secret world to me,  way out beyond the pines and silver leafs that have long since overtaken the cranberry vines and hidden the bog from view.

I can remember spending hours out there playing hide ‘n seek with our kitties, riding gallant stick horses and jumping the ditches and often falling into them, which was all part of the fun!

What’s more, our family house was built on the site of the Kendrick Barrel Factory that burned down in the 1950’s; they made cranberry crates and fish boxes.

This fall I happened to ask the local Chamber if anyone knew when the cranberries were going to be harvested. And everyone told me the same thing, “It’s different every year, just keep checking and one day, it’ll happen!”

So I became a “bog stalker”. For weeks I drove by Jenkins’ Bog off Headwater Drive here in Harwich, checking to see if anything had happened yet.

Finally, one day I noticed that the bog was filling with water. I’d heard it could take up to 18 inches of water to harvest the ripened berries, and it sure looked like it was well on its way to reach that goal.

Right off the bat I spotted some new friends who seemed enthralled with the sudden emergence of a whole new feeding ground! 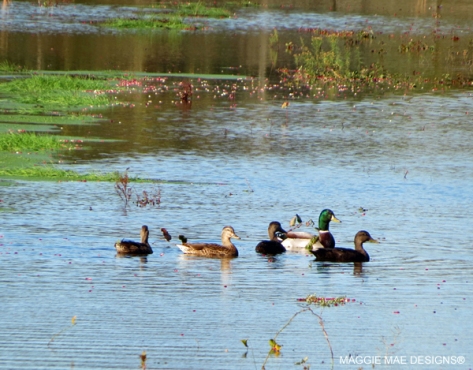 As for me, I was feeling mesmerized by the sight of the cranberries that were already floating in the still blue water.

I could see many, many more just below the surface, still nestled among their vines.

But this was no time to dawdle; the harvesters were arriving in their trucks.

Time to get to work!

Signs were posted asking visitors to keep out of the water. 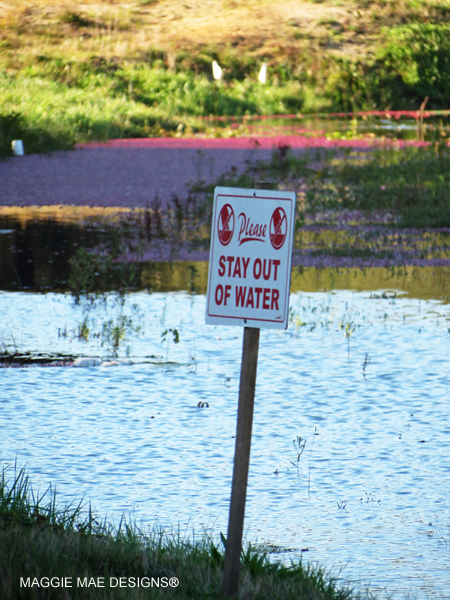 We were being given the chance to witness, up close, a real live crop harvest, Cape Cod style. It didn’t seem like too much to ask.

Just then I noticed up ahead that one of the water reel harvesters, “egg-beaters” as they call them, had arrived.

The odd-looking gas-powered machine rolled slowly down into the water.

Driven by a single operator…

The harvester was carefully guided through the bog; the spinning rollers on the front of the machine stirred up the water.

Someone mentioned that the smaller roller on the one side might be helpful handling cranberries along the edges of the bog.

So much to see and learn, and the magic had only just begun!

From where I stood I could see how the agitation caused by the eggbeater was literally shaking the cranberries loose from their vines.

Catching the light as they flew along in the froth and bubbles.

And once the eggbeater moved along by, the berries remained behind, floating on the surface of the water. Like tiny bobbers!

I found myself drawn to the movements and reflections of the berries along the edges of the bog.

Clusters of berries and leaves, constantly moving, would temporarily join, then break away and join with others. 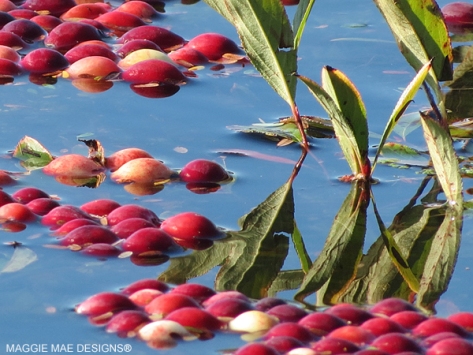 The sight was so calming to me, almost hypnotic.

Reluctantly, at long last, I looked down at my watch and realized that I had to go.

Just as I turned to leave, one of the farm hands gave me such a look of longing, almost as if he was asking why I had to leave so soon. 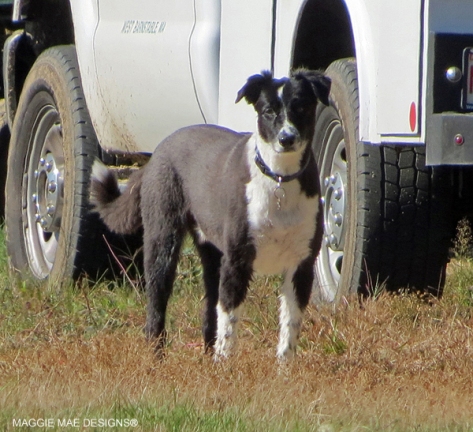 But I promised him I’d be back, tomorrow for sure. 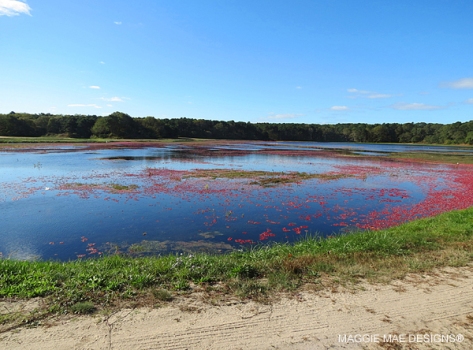 After all, I was home in the bog once again!  😉