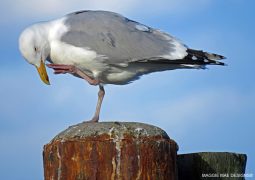 Sometimes I wonder if I share too many posts about birds.

So here’s my attempt at a “nonbird photo session” from a recent visit to the Chatham Fish pier.

Looking out from the Pier, the water was smooth like glass. 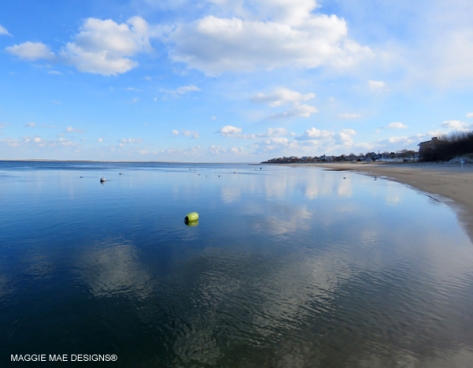 In the distance you could see the eiders, slowly making their way in as the day was drawing to a close.

I love buoys, and lucky for me the harbor is full of them in Chatham, all different sizes and colors!

Doesn’t that beautiful male White-winged Scoter make such a beautiful contrast to the orange of that buoy?

I also noticed that a truck was in from Red’s Best, a fish market/restaurant from Boston – it looks like someone has good taste when it comes to fresh fish!  😉

And isn’t that a cormorant on their logo?

There’s quite a bit of construction going on right now at the pier, with the brand spanking new observation deck due by June.

And can you tell who’s in charge of that particular project?!

Sometimes I think I’d like to take a stroll up the beach from the pier sometime, although I am guessing that sign up ahead probably says something about “CBI Guests Only”.

Say, do you think someone forgot to warn the gulls that they’re trespassing?

Myohmy, it sure was beautiful looking out toward Tern Island, where we’ll be seeing a lot of Oystercatcher families coming along again this year.

And it looks to me like the gulls are making their plans already for stealing as many oysters from those bright red bills as possible this summer!

This Lady Eider was clearly not impressed with their schemes.

As you can see, this gull could not for the life of him figure out why anyone would want to photograph anything but bird, birds, BIRDS!!!