I was walking Bank Street Beach the other afternoon, photographing gulls.

It was really windy, the seascape full of chop, and it wasn’t one bit easy holding the camera steady.

Just then I noticed something out in the water that I’d never seen before. 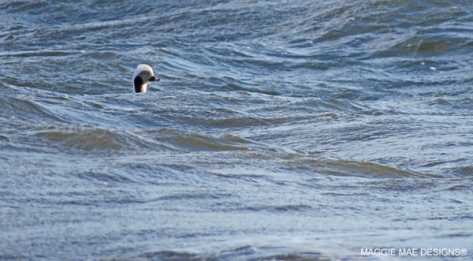 A tiny little head, swimming among the eiders and gulls.

And when I saw it pop up again, between the choppy waves, I couldn’t believe my eyes! 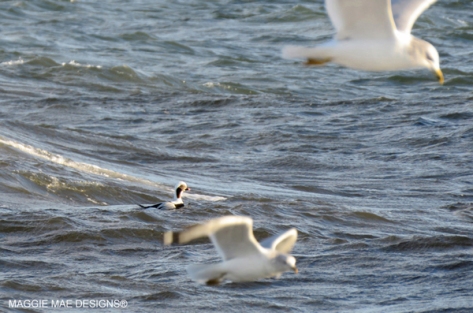 Three long, long tail feathers, a real short bill with a pink ring, white-gray-black feathers, and black “smudges” on the side of the head that almost looked like ears.

I later found out that it was a Long-tailed Duck…

And he wasn’t alone! 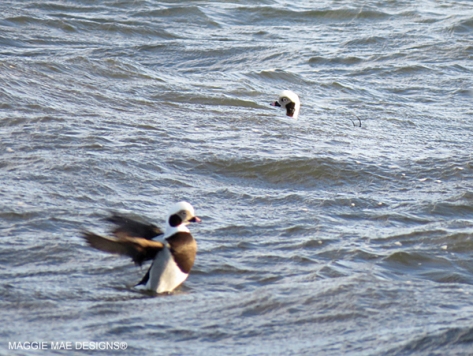 Long-taileds breed in the far Arctic regions, wintering here on the East Coast and on the West Coast as well.

And lucky for me, unlike most ducks the Long-taileds sport their striking plumage during nonbreeding season.

I sure would’ve hated to miss those tail feathers, they were outa’ this world!

I thought I counted three ducks in all, and they were busy as beavers; flying to and fro abruptly, then diving under the waves with great splashes.

When I turned to leave, I thanked them for visiting with me and becoming my newest “new life bird”.

Shaky camera and all, they took my breath away!   😉