Or perhaps simply my fascination with the way light and shadow can bring magic to a subject at any given moment in our natural world.

But last evening while I was out for a walk, something in the distance caught my eye.

Just to my left, backlit by the setting sun, a stunning Red-tailed Hawk perched high atop a deserted telephone pole.

A beautiful sight to see, anytime.

But there was something very different about one of the hawk’s feathers, and the way the light was catching it, that made me want to look closer. 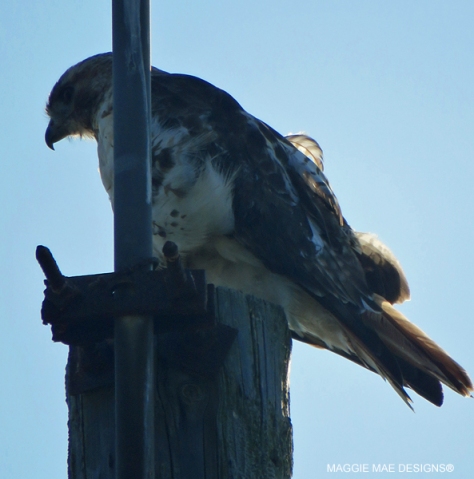 A single feather on the hawk’s folded wing appeared to be askew, twisted in a direction that didn’t fit with all the others.

Just then the hawk turned, as hawks often do, to check out something behind it that had caught its attention.

And that’s when this image happened.

The hawk’s feather, the angle of his head and the way the light was catching it made it look almost like the hawk had drawn a feather fan across its face!

Smiling at the moment, I walked past the hawk and spotted another hawk feather, this one lying on a lawn nearby.

Had there been a skirmish between the hawk and a crow, that maybe loosened a feather or two?

Or was this simply a feather the hawk had preened, that was ready to fall?

What I do know is, this was a special moment.

One that I am so glad, for whatever the reason, had caught my eye.  ❤